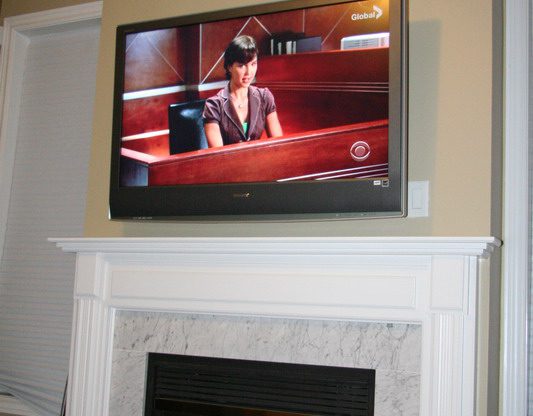 Edited: Not to be confused with the new posts, this DIY project was done in our old house many years ago back in 2006.

Is TV too high to put it above the fireplace? Mock it up! We decided to buy a Sony 46″ LCD TV, the photos showed the mock up on the wall. There were a lot of friends and family members warned us that the TV would be too high because it is not eye level. However, we strongly believe there shouldn’t be problem because we have a low back bi-sectional couch – we lay down to watch TV instead of sitting. See our verdict at the end.

Will the fireplace make the TV overheat?

I put a thermometer above the fireplace and tested it and temperature went up just a bit, so that’s good enough. Indeed, we rarely use the fireplace and we even turned off the gas to save energy on pilot light. Fireplace is useless for us, but we still need it because we may need to sell the house in the future.

Wall Patching above the fireplace

This is the MOST STUPID design I have ever seen in many modern houses. Because there is no way for you can put a big TV in that niche. I asked the builder and they said that niche was designed for TV. I have talked to some house owners, one of them indeed enlarged it and put a big projection TV inside (that looked ugly btw, also need to think about ventilation). Well, I am doing the reverse by patching up the wall and hang the LCD TV there.

Those architects (Thanks to Candy in one of the comments for correcting me, I was blaming on Interior Designer) who came up with this stupid niche idea should be fired. Do you think I am buying a semi-detached and I can’t afford a big TV? Go back to school and study the Architects 101, idiots. Do the Marketing and Focus Group research before you draw. This niche really pissed me off, because it wasted my time and money to patch it. I guess some architects don’t think about technology or future. Sigh…

Well, it is a pretty straight forward job, all I did was using 2×4 to build a frame to support the weight of the rotating torque of the TV. I also had to get a flexible hose for the video/audio cables to pass through to the side wall. Then, I had to extend the electrical box. Finally put  the drywall up and ready to paint!

It was NOT easy to make the cable go through the hose I planted, I should have put a wire before sealing the dry walls. Therefore I needed to “fish” the cable but the fishing wire (I used a coaxial cable) got stuck. So, I ended up attached a Ping Pong ball to cable and used the vacuum cleaner to suck it from one side to another (It worked!!).

Final Installation of the LCD TV above the fireplace

I made a mock up for the TV and mount using the card boards, it was very useful. I used only 4 screws (on 2 studs) because the Sony TV is only 60lb, and the manual of the Sanus mount said that 3 studs are required if the TV is over 125lb.

Verdict: (Updated on Feb, 2010) After having the TV above the fireplace for 3+ years, we love the setting and no one has neck problem at all. Thanks to the low back bi-sectional couch. During one long weekend, we even continuously watched movies and TV shows for over 7-8 hours! The most interesting part is that many of our friends and parents thought the TV would be too high for eye level originally, however when they came over to see it themselves, all of them said “Indeed, it is not too high!”