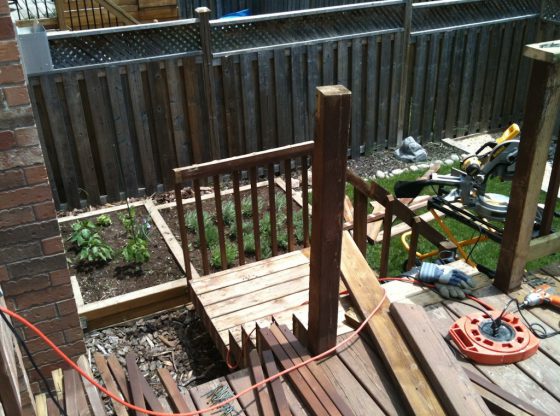 Edited: Not to be confused with the new posts, this DIY project was done in our old house.

We hired some bad contractors back in 2006 to build our deck. After 6 years, the railing started to wobble and the deck looks like it’s going to fall apart. I decided to take another look to fix whatever I can. My original fix years ago did not address all the issues, since the bad contractor didn’t even put enough 4x4s in the first place – they are missing everywhere.

Problem 1: Railing space was too wide, according to the national building code 4″ is the max. So, I had to take all the railing apart and at the same time I tried to change some design to make it look better

Problem 2: Missing 4×4 everywhere to provide proper support, also carriage bolts were not used to attach the 4×4. The way I fix is limited given that I need to work with the existing bad design from original contractor

Problem 3: Metal brackets were not being used, missing joist hangers. Not to mention hurricane ties and proper screws

Problem 4: The latest problem found when I took apart the stairs.  The guy used the stairs stringers which was fine, however he cut the solid bottom part (Google “stairs stringers”) and left the triangular part on the platform as the support only! The rest of the support comes from the railing, so it is like a suspension bridge!!! This is insane. Note that there were two 4×4 posts on the ground but the guy decided to use deck screws to secure the platform from the side. Purely amazing.  As you can see in the photo, the triangular piece of wood could not handle the weight over the years and started to split.

My fix: First, I hammered a  metal connector plate to secure the triangular part to prevent it from splitting.  Since there are two 4×4 posts on the ground, I cut it shorter and put two 2×4 on top of the 4×4. Now, the stair stringers is sitting on top of the 4×4. Finally,  I ran two 5/8″ x 6″ carriage bolts through the two 2×4 all the way to the side of the 2×6 platform. That is better support but honestly speaking if I were to do it from scratch, I would put 2×4 beams on multiple 4×4 and put the whole platform and stairs on top. Unfortunately, this is not easy to do unless the whole deck is taken down. Sigh.

Problem 5: The stairs platform has no proper support, the situation was very similar to stairs stringers. Therefore the fix was very similar – since I had extra 4×4 and I just used it as a horizontal beam.

Problem 6: Although I applied the workaround on the 6×6 structural posts 5 years ago on the side beam support,  it still bugs me from time to time. Forum people said I can use an automotive jack to temporary support the deck and put the 2×8 on top of the 6×6. Some people actually suggested a cheating fix by putting sister supports on the side of the 6×6, underneath the 2×6 side beam.

My fix: I gave up the idea of cutting the major four 6×6 posts to meet the building code because it is a bit dangerous and too much work. I know that my original eight 1/2″ x 10″ carriage bolts solution will fail in long run due to shear strength on wood, so I talked to my neighbor who is an automotive engineer, he suggested me to build a 45 degree diagonal bracing.  I took his advice because I am convinced.  This is an extremely stable and solid workaround, but due to the original bad contractor side beam support, this may not pass the building code.

This deck maintenance project took almost 2 months since I have a full time job and I have limited time to spend on weekends when weather is permitted.  Although not every part of my fix passes the building code,  but I have faith to host a party on the deck without worrying my guests got injured due to deck collapse.

The final step was to use “Behr Premium Stain and Finisher Stripper”  and pressure washer to get rid of the stain. Then, applied a thin coat of “Thompson’s water seal advanced natural wood protector” and it is completed.