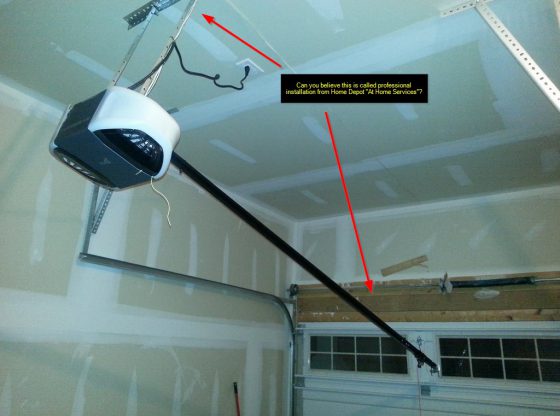 We moved to a new house and bought the Chamberlain HD620EVC from Home Depot and because of the tight timeline we had, we decided to get the professional to install it. It was a huge mistake to let Home Depot Installation Service do the job. Looked what happened after less than 1 week!!!! Luckily no one was injured or we would have contacted the lawyer and sued them. The time I spent on fixing it could have been used on the installation ourselves.

Can you believe this is called professional installation from Home Depot Installation Service? Okay, let’s examine the problems.

At least 10 mistakes the installer had made

First of all, I am just another DIY guy but with more than a decade of Home improvement experience, I feel I have enough qualification to point out what went wrong with such a simple installation and I will show you my DIY fix.

The solution and DIY Fix

Obviously the installer was not in Garage Door installation business, probably Home Depot just hired some handyman off the street. As I said, I am not a professional either but with some common sense and help of Google, I have fixed all of the issues in the proper way. What a waste of time. See the photos in details (with description).

We told Home Depot about the incident at Customer Service and they were glad that there was no person being injured or damaged to the cars, otherwise we would have contacted the lawyer and sued both the installer and Home Depot. Well, they gave us full refund on the installation – that’s good part about the satisfaction guaranteed. We told them we would fixed this ourselves and asking them not to send anyone attempt to fix it.

Next day, guess what happened? The same installation guy showed up and apologized for the incident, his boss told him to come to fix it. Of course, I politely sent him away. Obviously, Home Depot management had some internal communication issues – we have told them repeatedly (several associates at Customer Service desk) not to send anyone. Sigh.

The installation guy was actually a very nice person with good personality but I am sorry just being nice doesn’t cut it, I guess the guy needs to watch more HGTV.

On the side note of Chamberlain, it’s a very good product. The “Timer-To-Close” feature is the best, it is a must have. Strongly recommended. However, the SmartPhone Control has huge privacy and security concern, the problem is that it doesn’t let you communicate with your unit via WiFi without Internet. It forces you to go through the cloud, the problem is exactly like Honeywell/Nest Smart Thermostat. The unit does not have a local web server, MyQ internet gateway sends data to the server every 10-20 seconds. Therefore, if hackers break into their cloud database, they can sell the data to the local burglars. They will know exactly your daily routine (what time you usually leave the house and what time you come back). For people with high security and privacy concern, do not use.