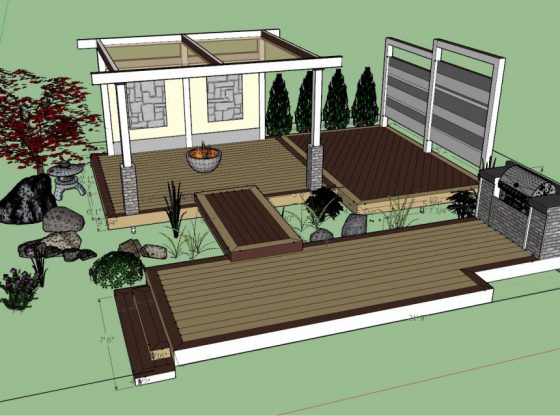 This project is still in progress, come back to check for more updates.

I used the free software “SketchUp 2017” to do the design, I have to admit I borrowed some ideas from Paul Lafrance after meeting him in person. I am not a professional, it took me a huge amount of time using the 3D software. But it was very helpful since it gave me the big picture and precise measurement on lumber and footings.

We hired the helical pile company (Goliath Tech) to do the deck foundation instead of concrete because it’s faster. However there pros and cons honestly speaking, watch the video I have explained a bit. Originally I was planning to have 22 piles installed but ended up with 20 because 2 of them they hit the rock, I didn’t have a Plan B at that moment, so… I had to fix it later by renting a towable auger from Home Depot and filled it with concrete.

Ledger Board to the rim joists + Deck2Wall Spacer

For ledger board, many deck builders would use lag screws or structural screws because they have no access to the basement. But I still prefer traditional carriage bolts, it went through the brick to the rim joist (brick is never a structural element), it is much stronger. Also, I put some 2×6 underneath the ledger board and bolted it to the foundation for additional support.

For the stair’s landing, I used the leftover HPB from my front yard project. It was very simple, one afternoon it was done. Zero cutting was necessary. I was worried that that step would be rotted if directly contacting with the interlocking stone, so I added some plastic tips at the bottom.

The 6x6x12s were extremely heavy, it’s around 130 lb each when it is wet. Those 2x10x16 was another nightmare when bringing it home from local hardware store. It was extremely challenging when putting them up by one person, the end result looks good is all my wife cares.

Questions you may ask:

Part 2 – How to use pressure washer to dig 12″ post hole? Homemade Hydro Excavator!

Part 4 – How to avoid getting a deck building permit even with Pergola?

Part 5 – How to build paving stone landing for decks in just 1 day?

Part 7 – How to build a pergola on the deck? No additional footings needed!

Part 8 – How to frame privacy screen for deck? Why Azek PVC over Wolf and Trex?

DIY fix – Hot water is not hot enough due to Anti-Scald Mixing Valves (Toronto and Ontario building code)
DIY Backyard (Part 14) – Ikea Sollerön review, assembly and how to protect it from rain and snow?